Sewing opens the door to ministry 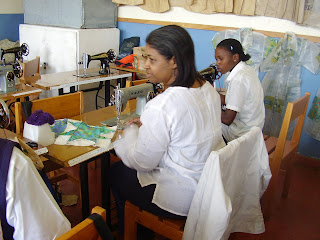 Yes that's me sewing on a treadle machine! 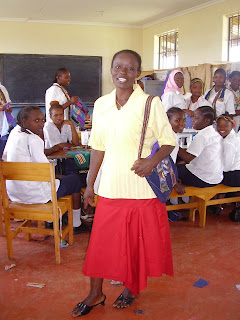 Zibora - sewing instructor wearing a skirt she
had me make for her while I was in Africa. 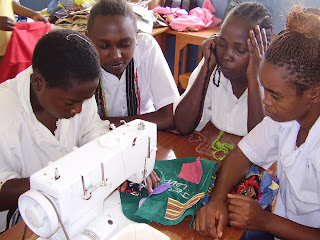 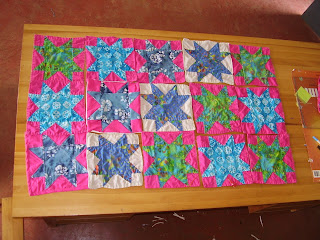 Quilt blocks made by students 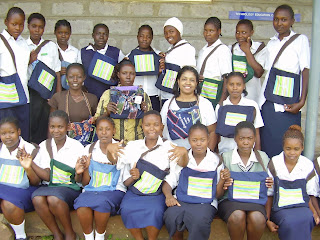 Carla, Zibora, Agnes and Students with bags made for staff
Fruit of the spirit embroidery by Diane Jordan, Desoto, TX 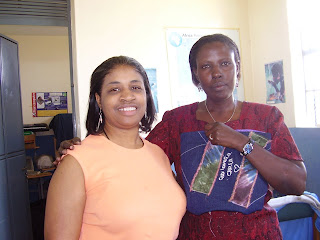 Carla and Agnes - embroidery teacher with her bag to remember me.
It says " God loves U Carla" ( I thought she was making it for me.)

Fabrics for the projects donated by Carla,
and Wycliffe Bible Translator's Sewing Room

There are two scriptures that I live by when it comes to sewing as a ministry. Proverbs 3:27 - Do not withhold good from those who deserve it when it's in your power to help them. Exodus 35:34- The Lord has given..... the ability to teach their skills to others.
Our first day at the BCC (Baptist Children's Center) and TEC Centre was the day that we discovered that the Sewing center was more than just sewing. Seeing Zibora, the sewing instructor, again was like greeting my sister. Zibora introduced us to Agnes, the embroidery teacher. Agnes was also an evangelist and as she showed me the writings in her notebook, I knew they were doing more than teaching sewing. They were also counselors to the women in the sewing program. Believe me when I say they felt comfortable to talk with these two women about anything going on in their lives. All of the women had two notebooks. One book was for learning pattern making and about the sewing machine. The other one was filled with notes about things they needed to know as women about their bodies, their families, and their spiritual life.
On this first day I really just wanted to communicate with the teachers, show them what I had brought over and see exactly what they needed. It was very apparent that they were excited that I had come just to be with them. Most people come to work with orphans or those who have HIV/AIDS.
They greeted me each day with a kiss on both cheeks. They did not talk much to me, but they smiled alot. I soon discovered that what I brought was like a treasure to them. In the US we sew with fabric no matter what level we sew. In Kenya they have to perfect making a pattern to size and sewing on paper before they are allowed to make it out of fabric.
I knew ahead of time that this class mainly worked on blouses and skirts so it was better that I chose projects that did not involve making patterns or clothes. I brought several purse/bag projects, pillows and quilting patterns. I didn't know at the time but this would be their first time making these items. Everyday was adventure starting with me learning how to use a treadle machine - fully operating by the pumping of my legs.
They were so excited after making the first bag, the teachers volunteered the class to make 20 more for the rest of the staff. You have to understand that I only brought 1 & 1/2 duffel bags of fabric and at the time I did not know there were going to be a total of 37 students and 3 teachers and 20 staff. I had planned to make this last with two sewing programs for the whole month. That fabric seemed to multiply and divide and there was always enough.
The students were not only proud of the bags but surprised that it belonged to them. They would ask if we were making these items for them to take home. The joy they had when I said yes was indescribable. The hardest part of the class was getting them to slow down and sew a little straighter. The excitement of sewing on fabric everyday was almost overwhelming. I finally had to do a few tricks that I practice with the students here to get them to slow down and go straight. The key to all of this was realizing that I had to teach the teachers first and then it was easy for them to translate to the women.
One of the more exciting events was Tuesday afternoons when they would clean up early and then have a time of worship and discipleship. There were a couple of Muslims in the class and they would excuse themselves after the cleanup time. But their worship time was awesome. To see the young women who obviously were going through something find relief and encouragement in the sewing room let me know that the door to ministry was wide open.
Posted by Carla A. Robertson at 8:02 AM

Reading this really touched me. I see the excitement too in the Kenyan people when they see that you are here just for them. If its just to bring them fabric, or to spend some hours at their work, it all becomes ministry.